Key injuries:
Philadelphia:
-Carson Wentz (QB) is OUT with a knee (ACL) injury
-Alshon Jeffrey (WR) is OUT with a shoulder injury
-Brandon Graham (DE) is QUESTIONABLE with an ankle injury

Breakdown:
When Atlanta has the ball:
The Falcons have an underrated offense. Most view their 2017 season as being a drop off from 2016 after losing OC Kyle Shanahan. The reality is both seasons were outliers – they got lucky in 2016 and unlucky in 2017.

Matt Ryan’s TD rate numbers are what jumps out to me. He had an obscenely high 7.1% TD rate in 2016 and a way too low 3.8% in 2017. These numbers tend to regress toward career means, which is 4.6% for Ryan. Julio Jones can help explain the touchdown dip – he ranked 8th among wide receivers in red zone targets (19), but only caught 3 touchdowns for the entire year. Julio was still a top 3 receiver in 2017, and we should expect the same this year. Touchdowns are a fairly random event, but have a major impact on total points scored. We should expect both Ryan and Jones to put up better numbers than 2017, but they’ll never hit their 2016 efficiency rates either.

Here’s the lesson: don’t get tied down with volatile/short sample size numbers and biases from the previous season. I’m sure a lot of you are sitting here thinking Ryan and Julio fucked up your fantasy season last year and you’re pissed at them. The betting world doesn’t care. This is a top tier quarterback with great offensive weapons (Julio, 1st round pick Calvin Ridley, Mohamed Sanu, and two running backs that can catch the ball and run it equally well). The offensive line is one of the best in the game. They’re pretty fucking good, okay?

(I don’t know why I put that here)

Philadelphia’s defense:
The bettors with a short term memory will likely remember an Eagles defense that had a difficult time stopping the Patriots offense. No shit, so did everybody else. We shouldn’t forget that this was an elite unit last year (ranked 2nd in both PFF’s ranking and in FO’s Weighted DVOA). They lost DE Vinny Curry, but replaced him with Michael Bennett and added DI Haloti Ngata as a run stopping depth piece. They also lost their starting slot corner Patrick Robinson. That’s an underrated loss for the Eagles – Robinson was excellent in a position that’s becoming more and more relevant in today’s NFL, and the other Eagles corners (Jalen Mills and Ronald Darby) struggled last year. This is still an elite defense, but they need to get to the passer to make up for potential issues at corner. In my mind, they’ll still be very strong against the run.

TL;DR Conclusion: God damn, this is going to be an awesome matchup. The Eagles defensive line against the Falcons offensive line is some real Golith vs Golith shit. The Falcons end up getting points on the board because their receivers outmatch the Eagles corners.

When Philadelphia has the ball:
Well, it looks like Nick Foles is the staring QB for the Eagles and Alshon Jeffery is out. I am going to have to rant about Foles. Here goes:

Most likely view Foles as an elite backup and minimal drop off after his God-like performance in last years playoffs. You are all out of your minds. Here’s an unfriendly reminder: Foles’s last few games are absolutely at the highest of his range of outcomes, and expecting that level of play to continue would be foolish. Before taking over for Wentz, Foles hadn’t been a successful NFL quarterback since 2013. Even looking at last year alone – Foles was decent in his first game back (against the Giants “defense”), but then strung together straight up bad games against the Raiders in week 16 and the Falcons in the divisional round before being beyond brilliant in the conference championship and the Super Bowl (side note, I’m deliberately ignoring week 17 since the Eagles rested most of their starters). Don’t be a square who looks at a 2 game sample and draws conclusions based on that. In the divisional round against the Falcons, he threw for 246 yards and 0 touchdowns on 31 dropbacks. If you look at the entire picture, you can see this guy can absolutely play like Napoleon Dynamite instead of Uncle Rico. 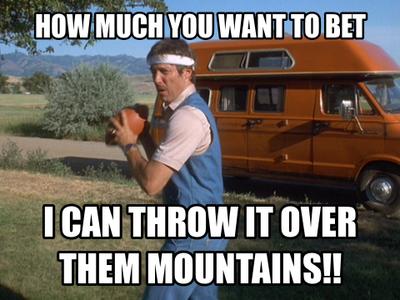 (because Foles sorta looks like Napoleon Dynamite.. I’ll.. I’ll see myself out)

The other injury concern for the Eagles is top receiver Alshon Jeffery is expected to miss this game. That leaves Zach Ertz, Nelson Agholor, and newly acquired Mike Wallace as the primary receivers.  The Eagles will also feature Corey Clement and Darren Sproles as receivers out of the backfield. Jay Ajayi returns after being traded to the Eagles last year from Miami and should a heavy share of the carries. The offensive line is an elite unit – they get LT Jason Peters back from a knee injury after he missed the last 9 games of the season last year. Last year the Eagles ranked 8th in weighted DVOA (6th in pass, 15th in run). Wentz and Jeffery are key injuries, and we should expect them to be a downgrade from that. I’m not sure the betting market is viewing this offense the way they should.

Atlanta’s defense:
The Falcons defense ranked 22nd in weighted DVOA last year, but were 5th in PFF’s rankings. They lost DE Adrian Clayborn and DT Dontrai Poe to free agency, and didn’t replace either of them. I look at them and see this: they have two above average corners (Desmond Trufant, Robert Alford), a solid safety core (Ricardo Allen, Keanu Neal), and one of the better all around linebackers in the game (Deion Jones). Brooks Reid is a solid edge rusher, but they don’t have much behind him. Same story with Grady Jarrett and the interior guys. This is a very good secondary with some capable pieces, but they’re weak in other key areas.

TL:DR Conclusion: In the trenches it isn’t even close, the Eagles offensive line is going to have their way with the Falcons defensive line. I do like the Falcons secondary over the Eagles receivers, but most are overrating Nick Foles because of recency bias. This is another even match up.

This game opened at Philadelphia -4. As it became more clear that Jeffery and Wentz weren’t going to be ready, it moved to 3.5 I loved the Falcons at that number, but since Wentz has been officially ruled OUT, the line has dipped below 3. That’s a key number, and now I’m taking the stance that you should sit back, have a beer or twenty, enjoy the opening night of the NFL, but do not bet this game.