Key injuries:
Carolina:
-CB Ross Cockrell is on IR with a leg injury
-RT Daryl Williams is QUESTIONABLE with a knee (MCL) injury

Breakdown:
When Dallas has the ball:
Dallas finished with a sneaky decent offense last year (12th in both FO and PFF rankings), despite the constant concern about Zeke Elliot’s suspension before it finally came to fruition. Coming into 2018, I’m sure that’s a relief for all Dallas fans that they won’t have that hanging over their heads. 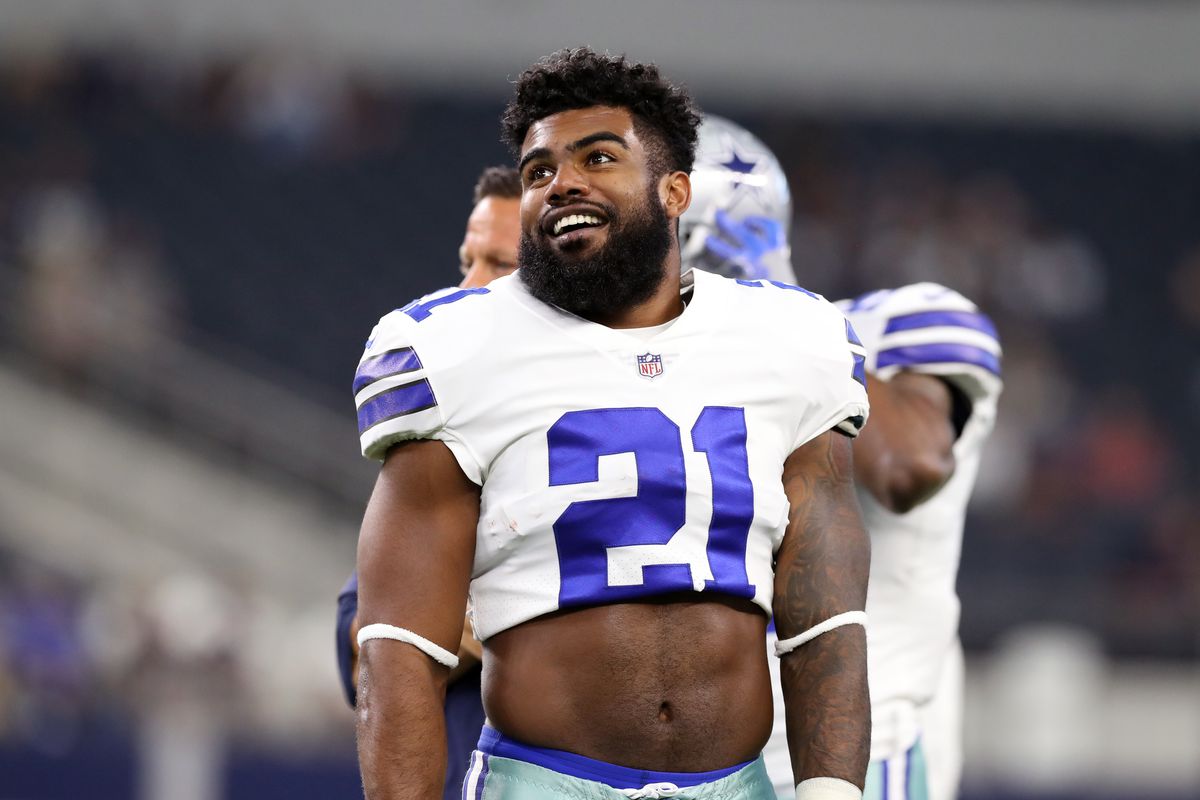 See, we have happy Zeke.

Dak returns after a somewhat sophomore slump (though he was still better than you think) behind an offensive line that is still one of the better lines in the league, though it is worth noting that it looks like starting center Travis Frederick isn’t going to play. The Cowboys let Dez Bryant walk and replaced him with slot receiver Allen Hurns. TE Jason Witten retired after a brilliant career – his longevity and ability to get open despite running at old man speed never ceased to amaze.

The weapons at TE and WR are definitely weak for Dallas, but a solid running attack with a top tier offensive line and a stable QB is recipe for success. The public is overlooking this offense.

Carolina defense:
This defense projects to be one of the top in the league.  They have an elite front seven – Luke Kuechly, Thomas Davis, Kawann Short, and newly acquired Dontari Poe are all  a force. The secondary has a lot more concerns, they have two decent enough safeties (Da’Norris Searcy and Mike Adams), but their corners are questionable.

TL;DR Conclusion: This should be a better than anticipated matchup. As a pure football fan, the Cowboys line vs the Panthers front seven will be fun to watch. The Cowboys are weak at the skill positions, but the Panthers don’t have great cover corners as well. I expect a stalemate.

When Carolina has the ball:
Carolina made the decision this year to move on from Jonathan Stewart and appears to be ready to roll with Christian McCaffrey full time. Though they brought in CJ Anderson, from preseason usage we should expect the Panthers to rely fully on McCaffrey. It’s worth noting that this is a bottom tier offensive line, and McCaffrey struggled last year running between the tackles.

Cam Newton will have to look to McCaffrey and TE Greg Olsen, who is returning from a foot injury. His other receiving options are Devin Funchess, Jarius Wright, and  Torrey Smith – Smith is only 29, which is crazy as I was almost certain he was at least 80. Smith hasn’t been good since 2014.

I think in the end the Carolina offense will be okay, but it’s fair to wonder if McCaffrey can fix his interior rushing issues behind this line, and if Newton has enough of a supporting cast to flourish. The Panthers are built similar to the Cowboys, but Dallas actually has an offensive line and a far superior running game.

Dallas defense:
The Dallas defense has a front seven that features perpetually-injured-but-will-be healthy-in-this-game Sean Lee. Lee is essentially the quarterback of this defense, and there is a noticeable difference when he’s out. They have DE Demarcus Larence up front, who was one of the best pass rushers in the league last year. DT Tyrone Crawford is also solid up front, and Xavier Woods and Jeff Heath make for a solid 1-2 punch at safety. Chidobe Awuzie played well at corner last year, but there isn’t much behind him. It’s worth monitoring the injuries to Awuzie and Woods as the week progresses (aka keep checking this blog).

That’s really it for the defense, so while they have solid contributors, there’s still plenty of missing pieces here. Most project this to be an average defense, and I think that sounds about right.

TL:DR Conclusion: I have doubts that the Panthers offensive line will be able to hold up the Cowboys front seven. In the end, Carolina will have to rely on McCaffrey and Olsen to get open.

This should be a very even matched game, so we’re happy to take 3 points on either side.

That’s it for now, bitches. Read my other stuff: