Breakdown:
When the Giants have the ball:
I wrote about the Giants last week as well. Odell Beckham Jr. proved he is literally matchup proof, catching 11 balls on 15 targets for 111 yards against the best defense in the league (Jacksonville).  That’s truly impressive, until you realize Eli Manning is throwing him the ball, then you realize it is downright insane.

Seriously though, 3 catches, 60+ yards, and 2 TDs left on field last week through no fault of Odell's pic.twitter.com/XFXPHn7vNL

In his NFL debut, Saquon Barkely struggled on the ground until he scored a 68 yard touchdown in the fourth quarter.

The problem with the Giants offense is their offensive line.  Specifically Ereck Flowers struggles as badly at tackle as his parents did to spell the name “Eric” properly.  Oh – and their quarterback is Eli Manning.

Cowboy’s defense:
Luckily for me, I evaluated Dallas last week as well.  I wrote that this front 7 is underrated if they can keep healthy, and they are in this matchup. They were without Xavier Woods last week, but he could return this week. In particular, I love DeMarcus Lawrence’s matchup with the Giants offensive line. He’ll spend most of his time lined up on Flowers.

The Cowboys do not have anybody that can defend OBJ properly, but nobody does.

TL;DR Conclusion: This is a bottom tier vs bottom tier matchup, but I like how the Cowboys matchup against the Giants in the trenches. Particularly at home, this is advantage Cowboys.

When Dallas has the ball:
The key to Dallas is their offensive line, and unfortunately they were not great last week. They did have a very difficult matchup against the Panthers, and there is also a slight chance they get back starting center Travis Frederick (illness). They are still ranked 6th in Football Outsider’s offensive DAVE rankings. They finished 12th in both Football Outsider’s and Pro Football Focus’s rankings. These are much higher than people think.

As mentioned last week, Dallas has a solid offensive line with a decent quarterback and elite run game. That’s enough to get things done.

NY Giants defense:
The Giants have a solid enough front 7, but they were without defensive end Oliver Vernon (ankle), and he also didn’t practice on Wednesday (9/12). David Tomlinson, and Kareem Martin, and Damon “Snacks” Harrison are still all solid, but their linebacking core is weak and their secondary kinda blows (save Landon Collins). This is a bottom tier defense even with Vernon.

TL:DR Conclusion: Even with Snacks, the Giants had a rough run defense last year and gave up 4.6 ypc to Leonard Fournette before he had to leave the game with a hamstring injury. This week they have an even tougher matchup against Zeke. 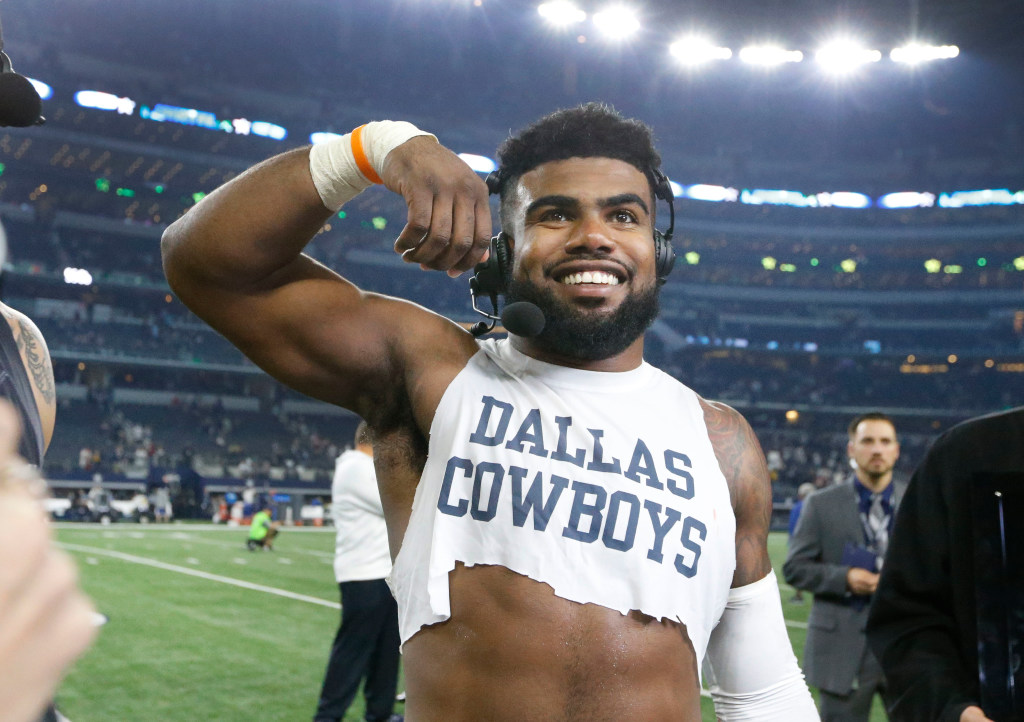 The model loves the Cowboys again. It’s clear that it’s higher on them then most, and since they lost last week it’s a perfect time to double down on that. Ride or die model, baby.

Other week 2 articles:
CAROLINA (+6) OVER ATLANTA
SEATTLE (+3.5) OVER CHICAGO
TENNESSEE +2 OVER HOUSTON